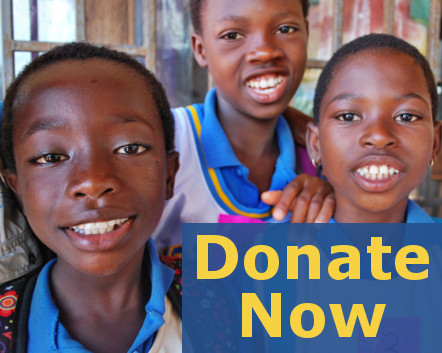 Provide free education, shelter and care for disadvantaged children across the globe regardless of sex, age, race, religion or tribal origin.

Use education to achieve sustainable development meeting the outcry of children around the world. Education, art, career and cultural programmes will foster children to become more successful adults in their social environments.

Mawuvio's Outreach Programme was founded in August of 2009 by Eric Kwame Agoe and Renee Farwell.

Agoe, a native Ghanaian, was abandoned at a young age and suffered homelessness. Unable to afford public school fees, he was forced to drop out of school and start working to afford one meal a day. Over the years Agoe noticed more and more children in his neighborhood suffering through the same situation, because of their inability to pay school fees. These observations led to Agoe's dream of one day building and running a free school for children to ensure they did not grow up as he did.

Farwell was attending the University of Ghana (Legon) as part of a study abroad program through Roosevelt University, Chicago. A chance encounter at the University crossed the paths of Agoe and Farwell. They got into a conversation about Agoe's life, the children in his community and what needed to be done to change the hopeless poverty many children were growing up in. Together they established an outdoor free education and care facility in Kissemah, an outskirts of Ghana's capital Accra.

By 2010, Farwell raised enough money from organizations and individuals in her native Eastern Iowa community for her and Agoe to purchase a plot of land. In February they broke ground on a 6 classroom 2 dormitory primary school. Construction was completed by September of 2014 and Mawuvio's Outreach Programme began their sixth academic year in their new home providing forty orphaned youth a permanent home and forty disadvantaged children from the community a free school to attend.

2014: Reach for Change Ghana 3rd Place Finalist in the area of Education

2015: MTN Heroes 2nd Round Finalist in the area of Education